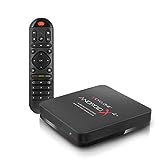 The new Android X4+ now comes with a 64-bit CPU that provides faster speeds when running and opening apps giving you quality and smoother experience.

The Cyclone Android X4+ CPU chipset is much faster when compared to the older Android X4 805 chipset.

Better optimisation for 3D processing giving you a more enjoyable experience on games.

Watch some of your favourite films or perhaps listen to some great tunes from your external media.

You can download hundreds of addon’s available online to further enhance your KODI media center.

This new small and simple design will look good in any home or environment!

Expand your entertainment needs by adding additional devices such as speakers, headphones, keyboards and many other bluetooth devices!

Millions of apps on Android 5.1

Using the latest Android 5.1.1 the Cyclone Android X4+ provides a new user friendly interface that makes Android easier to operate than ever before!

There are millions of apps and games online available for you to download! Expand you media player with an infinite amount of possibilities.

This website uses cookies to improve your experience while you navigate through the website. Out of these, the cookies that are categorized as necessary are stored on your browser as they are essential for the working of basic functionalities of the website. We also use third-party cookies that help us analyze and understand how you use this website. These cookies will be stored in your browser only with your consent. You also have the option to opt-out of these cookies. But opting out of some of these cookies may affect your browsing experience.
Necessary Always Enabled

Any cookies that may not be particularly necessary for the website to function and is used specifically to collect user personal data via analytics, ads, other embedded contents are termed as non-necessary cookies. It is mandatory to procure user consent prior to running these cookies on your website.